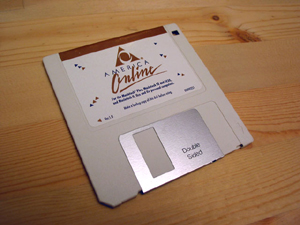 With the passing of time, both the dawn and the golden age of the internet are both long since things of the past. Much like the expiration of early automobiles, collectors have found outrageous value in clinging to the past, and AOL startup discs are no exception. This week, Todd Farmer of West Chester, PA, sold his mint-condition AOL 1.0 startup disc for over $9,000 in an online auction.

Todd Farmer knew he was sitting on gold, but he'd been sitting on it a good long time.

Mr. Farmer explains, "that disc served me well. It's a 5 1/2" floppy, double-sided, double-density with all the original packaging. This bad boy wasn't free for me or anybody back then, so I wasn't about to throw it away."

Mrs. Farmer sings as different a tune as the contrarian ballad she's always harped. "He's had that stupid thing framed and hanging in the front room ever since before I knew him, and we've been married eight years. I kept trying to sneak it in to the trash, but he kept fishing it back out. I guess the last laugh's on me, we're going to Hawaii now."
Posted by Shawn at 4:12 PM 655 comments:

Bay has officially outlawed cash payments among its 100 million members. The auction site has begun deleting listings from sellers who offer to accept cash, saying that these sellers tend to be involved in scams.

"The U.S. Postal Service tells us it's unsafe, and now eBay is telling everyone that it is unsafe," said Matt Halprin, eBay's global policy VP. "So if a seller solicits or encourages offers to accept cash, [they are] encouraging unsafe payment methods and we do remove that seller's listing."

eBay managers approved the policy in October, but the change wasn't widely publicized or enforced until this week. Recently, several longstanding PowerSellers who have traditionally accepted cash complained that eBay is trying to force them to accept PayPal. eBay purchased the payments company in 2002, and is aggressively promoting its use.

After a rash of fraud last year, eBay and other sites such as Amazon.com warned buyers against paying for expensive items with non-reversible bank wire transfers. In many cases the fraudulent sellers posed as U.S. residents, but were actually outside the U.S. and never shipped merchandise after collecting the payments.

Some eBay sellers offering heavy or bulky merchandise don't offer shipping, and require buyers to pick up their goods. Some eBayers speculate that these sellers could technically comply with eBay's no-cash policy by advertising a policy of accepting checks, then verbally offering to accept cash when the buyer arrives for pickup.

"You've got to wonder though," said one eBayer who asked not to be identified. "Is eBay going to outlaw checks and money orders next?"
Posted by Shawn at 10:54 AM 375 comments:

A VERY RARE PAIR OF `SIGNAL AUDIO COMMUNICATIONS` S.A.C. HATS. MADE IN USA BY `KUSAN` EACH HAT IS A HUGE 14ins TALL. THE FRONT MEGAPHONE IS 8ins WIDE. WILL FIT ON AN ADULT. (THIS SAME PAIR WAS USED BY MANCHESTER BAND THE HAPPY MONDAYS FOR A PROMO VIDEO). COMES WITH ONE BOX WHICH IS IN PARTS,AND IS VERY TATTY,AND A PAIR OF SHOULDER POWER PACKS,WHICH SEND MORSE CODE SOUNDS THROUGH THE HATS! LOOK TO BE IN VERY GOOD CONDITION FOR AGE, BUT COULD USE A CLEAN.--PLEASE SEE PHOTOS. DONT KNOW IF THEY WORK AS THEY NEED BATTRIES. THE INSIDE WIREING LOOKS TO BE VERY SIMPLE. A VERY RARE HARD TO FIND SET, AND THE CENTREPIECE FOR ANY VINTAGE SPACE AGE COLLECTION ! NOT TO BE MISSED,-LOW START AND NO RESERVE.

Gee... what a great toy for a kid. Nevermind the fact that it would probably give them nightmares and turn them into someone with a personality disorder, but whatever... :)

OMG dude, I don't even know what to say about this one. It's a "penis muffler" that appears to be officially sanctioned by the US olympic ski team in the 1960s.

To be honest, I didn't even know that skiers were supposed to wear penis mufflers. hahaha

An eBay auction offering a night with actor/director Vincent Gallo has been withdrawn from the website, because it breaches their rules on selling sex. The vendor, claiming to be the 43-year-old Brown Bunny filmmaker himself, offered a night of passion for the sum of $ 50,000.

He wrote, "I, Vincent Gallo, star of such classics as Buffalo 66 and Brown Bunny have decided to make myself available to all women. For the modest fee of $50,000 plus expenses, I can fulfill the wish, dream, or fantasy of any naturally-born female. Heavy set, older, red heads and even black chicks can have me if they can pay the bill. No real female will be refused. Scanning for STD's is required as is bathing and grooming prior to our encounter."

However, the controversial posting was soon pulled off.

Spokesman Hani Durzy tells the New York Daily News, "It's a clear violation. We don't allow people to offer escort services or services of a sexual nature."
Posted by Shawn at 10:34 AM 586 comments:

Now you don't even have to go through the trouble of making your own friends. You can just pay these guys to be your friend for a night in a bar. Of course, you have to go to Australia, but whatever... true friendship is eternal! :)

From Auction:
his IS the ultimate in the exotic car world!! Delivery of this vehicle will be available in December!! The FXX is powered by an imposing 6,262 cc V12 engine that can punch out over 800 hp at 8,500 rpm. Its gearbox is the result of the transfer of F1 strategies, delivering gear change times of under 100 ms. This is almost as fast as the F1 single-seaters, themselves the absolute pinnacle of current technological achievement. The FXX is the most advanced GT ever created at Maranello and its mission is to involve Ferrariâ€™s most valued Clients as genuine Prancing Horse Test Drivers in their own right. The wealth of data and experience gathered in the course of this very special programme will be exceptionally important. In fact, the feedback from these highly skilled, non-professional Client Test Drivers will be compared and supplemented with suggestions from Michael Schumacher, Rubens Barrichello and Ferrari's professional in-house Test Drivers. Every Client who signs up for the FXX project by purchasing one of the 20 cars being built, will actually be joining Team Ferrari, and will have his driving experiences at the wheel of this new car monitored directly by the Prancing Horse's technicians and specialists. The FXX package also includes participation in a series of track events to be organised by Ferrari on various international-level circuits over the coming two years. On these occasions, an official team of technicians will be on hand to provide any assistance and support required by the Client Test Driver. In addition to these truly unique official events, Clients will also be able to take their cars out on the track independently during private sessions. Clients wishing to leave their car at Maranello will be glad to know that the vehicles will be transported directly by Ferrari to the various European circuits for the scheduled events. Given the car's exceptional performance and the unique nature of the package, delivery of each FXX will also include an ad hoc driving course. The instructors will, of course, be professional drivers and the courses will take place at the Fiorano Circuit where Ferrari does its most important F1 single-seaters testing. After the seat and the pedals have been individually tailored to each driver, there will be a traditional test session followed by a training session dedicated to test driving methodologies.
Posted by Shawn at 12:59 PM 136 comments:

An ordinary fruit sticker that mysteriously ended up on a $20 bill could spur currency collectors to bid up to 1,000 times the bill's face value at an auction Friday.

The flawed bill bears a red, green and yellow Del Monte sticker next to Andrew Jackson's portrait. The bill originated at a U.S. Treasury Department printing facility in Fort Worth, but how the fruit tag found its way onto the greenback is unknown.

"I've collected for probably seven years now and nothing comes close to the way people react to it -- their eyes pop out," said Daniel Wishnatsky, a Phoenix currency collector who bought the bill in 2003 on the eBay auction Web site for $10,100.

Heritage Galleries and Auctioneers was auctioning the bill for Wishnatsky in Orlando, Florida. The auction company and Wishnatsky, a member of the Society of Paper Money Collectors, think the bill could fetch two to three times his investment.

Jason Bradford, president of PCGS Currency in Newport Beach, California, authenticated the error was genuine and not faked outside the printing plant.

Bradford said currency goes through three printing stages: first the back is printed, next the face and then the bill receives serial number and treasury seal stamps.

In the case of the Del Monte note, the seal and serial number are both printed on top of the sticker, meaning the fruit tag must have found its way onto the bill midway through the process, he said.

There's no way of knowing whether a mischievous printer intentionally placed the sticker on the bill, he said.

The Treasury's Bureau of Engraving and Printing, which produces all U.S. paper money at facilities in Washington and Fort Worth, inspects and destroys flawed currency before it escapes the plants.

It investigated the note's history after the misprint surfaced but couldn't pinpoint a cause, spokeswoman Dawn Haley said.

The note, which is in nearly perfect condition, has achieved celebrity status among currency collectors, appearing on the covers of the Bank Note Reporter and Numismatic News.

The World Aquarium in St. Louis, Missouri, has been home to We, a one-of-a-kind two-headed albino rat snake, since 1999. President Leonard Sonnenschein has decided to sell the reptile, and bidding on e-Bay will start at $150,000 (euro 126,840).

"It's an amazing snake," Sonnenschein said Monday. "When people see it they are awestruck."

The 61/2-year-old snake came to the aquarium's attention when its previous owner distributed a circular offering it for sale days after its birth. The aquarium paid $15,000 (euro 12,685), knowing that most two-headed snakes don't live more than a few months.

But We has survived and thrived. An inch (2.5 centimeters) thick and 4 feet (1.2 meters) long, she is a healthy size for a rat snake. While her body is white, the heads have a reddish appearance.

We has survived because, unlike some two-headed animals, both mouths are connected to the same stomach, Sonnenschein said.

Van Wallach of Harvard University's Museum of Comparative Zoology said We should live an additional 10 to 15 years. And Sonnenschein said it's at a ripe age for breeding.

"We expect the sale of We to be on the same level of demand as a priceless art object," he said.

The snake has been in the spotlight before. In 2004, a disgruntled City Museum worker stole We. Authorities found the snake in the garage of the man's home in Illinois.

The last 1,000 advertising pixels for the Million Dollar Homepage have gone up for sale on eBay.